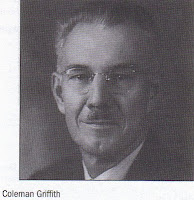 He was a psychology professor at the University of Illinois (Urbana-Champaign). In 1938 Griffith was asked by PK Wrigley to do a complete psychological analysis of the Cubs for a project he called “Experimental Laboratories of the Chicago National League Ball Club.” Naturally, his first target was manager Charlie Grimm, a man that was so much a part of the fabric of the Chicago Cubs that he would have his ashes spread on Wrigley Field after this death. There was no way of knowing that this baseball lifer wouldn’t respond well to being told what to do by a “headshrinker” from Urbana, but shockingly, even “Jolly Cholly” Grimm wasn’t exactly receptive.

When Grimm was replaced in July by player Gabby Hartnett, a man later declared as the winner of the “Drizzlepus Derby” as grumpiest manager in baseball by one Chicago paper, Griffith could have folded up his tent and quit, but he didn’t. He wrote a paper explaining “pepper” to the future Hall of Famer Hartnett. He pointed out in another paper that there was no such thing as “instinct.”

Somehow, and this is also going to be a big shock, his information was not exactly embraced by the players. The 1938 Cubs were a veteran team (average age: nearly 30), and with future Hall of Famers like Dizzy Dean and Tony Lazzeri on the roster, they were not exactly the prototypical audience for experimental psychological research. Griffith also didn't help his cause with his analysis of the players. For instance, he used a very complex statistical model to show that Phil Cavaretta should be traded because he would never amount to anything.

People made fun of Wrigley for using Griffith that year, but on the other hand, the Cubs did go to the World Series in 1938. Wrigley really wanted him to come back full-time for the 1939 season, but Griffith wanted to spend more time with his family in Urbana.
Posted by Rick Kaempfer at 8:25 AM