My book "everycubever" is coming out in April and will feature mini bios of everyone who ever played for the Cubs between 1871-2018. Among them, today's birthday boy... 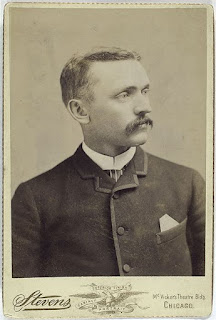 ~George Moolic 1867--1915 (White Stockings 1886)
George had one of the greatest nicknames in Cubs history. His teammates called him Prunes. He was a 19-year-old backup catcher and outfielder for the 1886 National League champs, but he didn’t make much of a contribution to the team. He hit only .143 in 56 at-bats. That was the full extent of his big league career. Prunes may not have lasted long, but he could always say that he played on one of the most star-studded teams in Major League history. Among his teammates: Hall of Famers Cap Anson, King Kelly, and John Clarkson, plus stars in their day like Ned Williamson, George Gore, Jimmy Ryan, and Silver Flint. Oh, and the most famous of them all, future evangelist Billy Sunday. Prunes got a bloody nose in 1915 at the age of 47. Doctors couldn’t stop the bleeding, and after three weeks, he passed away. Official cause of death: nasal hemorrhage.
Posted by Rick Kaempfer at 4:00 PM